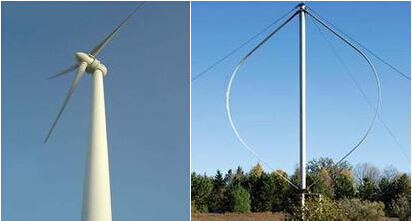 When you talk about modern wind turbines, you're looking at two primary designs: horizontal-axis and vertical-axis. Vertical-axis wind turbines (VAWTs) are pretty rare. The only one currently in commercial production is theDarrieus turbine, which looks kind of like an egg beater. (from Google)
In a VAWT, the shaft is mounted on a vertical axis, perpendicular tothe ground. VAWTs are always aligned with the wind, unlike theirhorizontal-axis counterparts, so there's no adjustment necessary when the wind direction changes; but a VAWT can't start moving all by itself-- it needs a boost from its electrical system to get started. Instead of a tower, it typically uses guy wires for support, so the rotor elevation is lower. Lower elevation means slower wind due to ground interference, so VAWTs are generally less efficient than HAWTs. On theupside, all equipment is at ground level for easy installation and servicing; but that means a larger footprint for the turbine, which is a big negative in farming areas.

(from How Stuff Works)


As implied by the name, the HAWT shaft is mounted horizontally, parallel to the ground. HAWTs need to constantly align themselves with the wind using a yaw-adjustment mechanism. The yaw system typically consists of electric motors and gearboxes that move the entire rotor left or right in small increments. The turbine's electronic controller reads the position of a wind vane device (either mechanical or electronic) and adjusts theposition of the rotor to capture the most wind energy available. HAWTs use a tower to lift the turbine components to an optimum elevation for wind speed (and so the blades can clear the ground) and take up very little ground space since almost all of the components are up to 260 feet (80 meters) in the air.

(from How stuff Works)